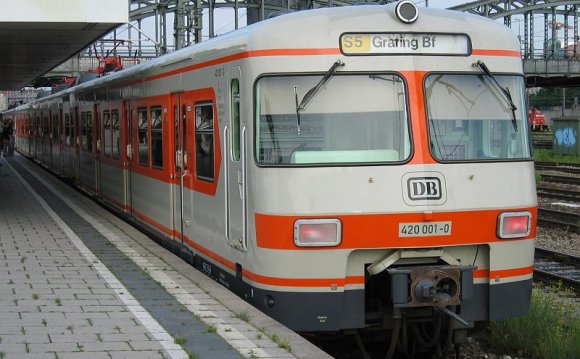 The Stuttgart S-Bahn is a suburban railway system (S-Bahn) serving the Stuttgart Region, an urban agglomeration of around 2.7 million people, consisting of the city of Stuttgart and the adjacent districts of Esslingen, Böblingen, Ludwigsburg and Rems-Murr-Kreis.

The Stuttgart S-Bahn comprises seven lines numbered S1 through S6 and S60, and is operated by S-Bahn Stuttgart, a subsidiary of the Deutsche Bahn. The system is integrated with the regional transport cooperative, the Verkehrs- und Tarifverbund Stuttgart (VVS), which coordinates tickets and fares among all transport operators in the metropolitan area.

All lines lead through the city centre of Stuttgart. The northeastern end of the tunnel (from the tracks near through ) was the first part of the tunnel to open and has been used since the beginning, the southwestern end from Schwabstraße through Universität since 1985.

The Stuttgart S-Bahn has a "memory schedule" or clock-face schedule. The basic cycle is one train per hour and line (which is only used early in the morning and late in the evening). During the day, there are usually additional trains which increases the cycle for each line to every 30 minutes (outside of rush hour) or 15 minutes (rush hour). Beginning at Schwabstraße and heading towards Hauptbahnhof, the schedule is as follows:

If there are additional trains, these times repeat at 15- or 30-minute intervals (which means that during rush hour the S4 will depart on e.g. 07:03 AM, 07:18 AM, 07:33 AM and 07:48 AM). Some additional trains do not travel the full length of the track, e.g. there are some trains of line S1 that shuttle between Esslingen and Schwabstraße or Plochingen and Schwabstraße instead of continuing through to Kirchheim u. Teck.

The first steps toward an S-Bahn in Stuttgart began after World War II. With the Stuttgart Central Station moved to its current location in the 1920s, the focus was shifted to construction of a downtown railway tunnel to improve access to the central city and points south. Simultaneously, the Stuttgart streetcar company was embarking on plans to build tunnels downtown for their system. Additionally, extra tracks were added to several outlying rail corridors in preparation for eventual S-Bahn service.

After financing agreements between the city, state and federal government and the state railway Deutsche Bundesbahn were reached, construction on the downtown tunnel from Stuttgart Central Station to Schwabstraße began on July 5, 1971. Work was completed in September 1978 and operation of the Stuttgart S-Bahn began with three lines (all beginning at station): the S1 to Plochingen via Esslingen, the S4 to Ludwigsburg and the S6 to Weil der Stadt via Feuerbach and Leonberg. Over the following years, the network has been extended to Bietigheim, Backnang and Schorndorf (1981) and the southern branches to Böblingen (1985), Herrenberg (1992) and Airport (1993). The S2 was then extended beyond the airport, connecting Filderstadt with the network.