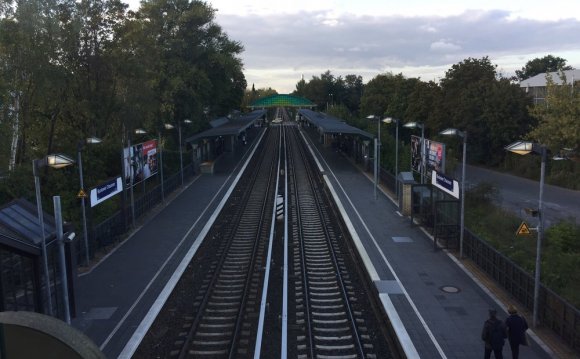 Berlin Central Station is the central hub for all rail traffic in the capital. Here inter-city and regional trains connect with Berlin's local rail, underground, tram and bus network.

S-Bahn lines S5, S7 and S75 link the Central Station with the east and west of the city. The U55 U-Bahn line connects the station to the government district and leads directly to the Brandenburg Gate.

The government district and the Reichstag: landmarks around the Central Station

Anyone not wishing to travel with Berlin's shortest underground line, the U55, can reach many sights in the capital on foot in only a few minutes' walk. To get to the Band des Bundes building complex and the Reichstag with its glass dome you only need to cross the Spree. And to reach the Haus der Kulturen der Welt (House of World Cultures) you just follow the riverside path. To the north of the Central Station you will find major museums such as the Hamburger Bahnhof with its contemporary art and the Naturkundemuseum for natural history with its unique dinosaur skeletons.

Both before and after their railway journey numerous shops at several levels of the concourse invite travellers to do some shopping. Anyone needing a coffee, a newspaper or some flowers at short notice will find what they're looking for. A number of fashion brands, car rentals and fan shops can also be found here.
When they arrive visitors to Berlin can contact the Berlin Tourist Information office. Here they will receive advice and tips for their visit to the city in a number of languages.

Berlin Central Station is one of the most spectacular architectural projects of the capital. After undergoing eleven years of construction, the station formerly known as the Lehrter Stadtbahnhof was reopened on 28 May 2006 as the largest and most modern connecting station in Europe.

There are two main levels for train traffic and three connection and business levels. However, it is interesting to note that the concept of a "cathedral of transport" was not quite able to be realised in accordance with the wishes of the architect Meinhard von Gerkan. For example, he had planned on having a vaulted roof but this had to give way to a flat roof. Furthermore, the glass roof above the upper rail system had to be reduced significantly.

Nevertheless, the station is delicate, spacious and full of light. The 321 metre long glass hall for rails running east to west is crossed by the 160 metre long and 40 metre wide concourse where rails are running north to south.

A sophisticated system of large openings in the ceilings at all levels allows for natural light to be let in so that it can even reach the lower tracks. The architecture places an emphasis on the character of the station as a traffic intersection. For the Hamburg-based architects Gerkan, Marg & Partner, the importance of the new Berlin Central Station consists in the fact that it serves as an interface in Europe and this point is the determining factor of their design.