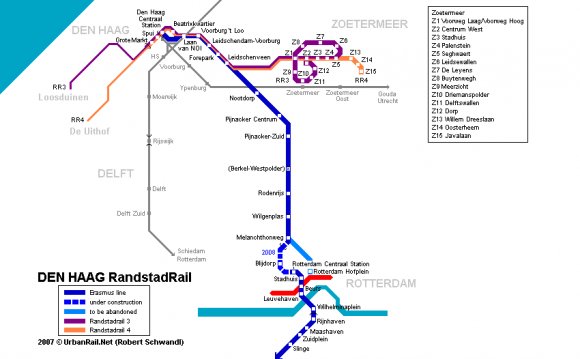 Railways in the Netherlands

This image shows the standard style of the station nameplate, white on blue, with a white square in the upper-left corner.

Stations are divided into two categories based upon the service they receive. These are, in order of decreasing importance:

There are exceptions to this categorization. Some local trains – despite being called stoptreinen – do not stop at all stations: two examples are the services from Groningen to Roodeschool and from Tiel to Arnhem.

ProRail classify stations into 5 categories based upon the facilities available. The categories are (in English): Cathedral, Mega, Plus, Basic and Stop.

In this order, these are the ten largest Dutch railway stations by number of passengers a day:

Stations are generally named after the town they serve. In case a town is served by multiple stations, additional names are given to specify the station's position such as:

Boxtel (has been replaced)

Partially in Leiden (only the abandoned ticket building)

Classic design station (type NFLS) in Marrum. No longer in use

Not the platforms, but the tracks are numbered. In Dutch communication, NS refers to "spoor 1" ("track 1"), etc. while in English communication, NS refers to "platform 1" where "track 1" is meant (hence all island platforms have two numbers). Tracks without platform access, used for through traffic, also have a number. This number is not indicated, but it shows indirectly by the fact that in the numbering of the accessible tracks a number is skipped. Track numbers are usually increasing in the direction away from the center of the city and hence away from the main entrance(s) of the station.

At many stations, above platforms and/or at their access points, there are dynamic displays (electronic displays) of the destination and departure time of the next train (see railway platform signs).

Machines and counters for train tickets[edit]

For checking in and out with an OV-chipkaart card readers are at station entrances, halls and/or platforms. It can be recharged (increasing the credit by paying an amount) at ticket machines. The anonymous variety of the card can also be purchased here. For some minor rail operators all this does not apply yet.

Paper tickets are available from the same ticket machines; at the counter (if available) a supplement of € 0.50 per ticket (with a maximum of €1 per occasion) has to be paid. In both cases one can choose a dated or undated ticket; the latter can be useful if one has not decided yet about the travel date. If the ticket is not dated it requires a stamp from a stamp machine on the travel date.

NS Stations (Dutch pronunciation: ) is a Dutch company that manages and exploits over 400 railway stations in the Netherlands.

Passenger comfort sometimes suffers from (homeless) beggars or pickpockets, especially in large cities. Measures taken to remedy this include installation of CCTV, locking waiting rooms in the evening, and sometimes removal of benches from station halls. Also, a valid train ticket is required to access platforms. Passengers with large luggage should note that no luggage trolleys are provided (except at the station of Schiphol airport), although platforms are accessible by elevator.

The official abbreviations of names of stations are used internally by the NS, but also on handwritten tickets; they can also conveniently be used when entering a station in the NS planner on (but not on ) and are needed in some URLs, see below. In a station it can be found in the lower right corner of the yellow departure schedules. In most URLs (see below) they have to be written in lowercase, in some a capital is optional. On the departure schedules they are written in lowercase. In other cases the abbreviations are written with a capital letter. For a list sorted by abbreviation see nl:Lijst van afkortingen van Nederlandse spoorwegstations.

Stations also have a four-digit code that is used on the keypad of older ticket machines to specify a destination.

Positions of multiple stations in one city, 1936