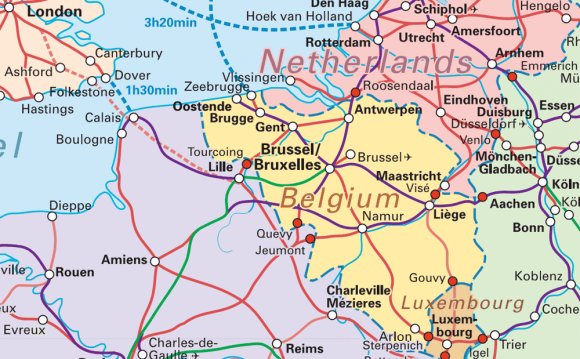 Belgium's prehistory begins with the LBK culture, which was later replaced by the Michelsberg and Swifterbant cultures. Belgium shares much of its history with the Netherlands and the other Low Countries, including the migration of the Celtics. In Belgium, there were people known as the Belgae on the northern edge of Gaul. Though influenced by the Celts, Belgae had a different language and Germanic origins. The Romans, led by Julius Caesar, arrived in the region, making an alliance and turning part of it into a Roman province called Gallia Belgica along with parts of modern-day France and Germany. Other parts of modern-day Belgium were included in Germania Inferior and Belgica Prima. At the fall of the Western Roman Empire in the 5th century, the region saw the rise of the Franks, with the Merovingian Dynasty, followed by the Carolingian Dynasty. In 843, the region was divided into Middle Francia and West Francia by the Treaty of Verdun, and ruled by the Holy Roman Empire.

Independent fiefdoms emerged from these divisions, and by 1433, the region of the Low Countries came to be ruled by the Duchy of Burgundy. Then by marriage, it came under the ruleof the Habsburgs and then joined to Spain under Charles V, who was the Roman Emperor. In 1549, under the Pragmatic Sanction, the Seventeen Provinces were formed in modern-day Belgium, Luxembourg, the Netherlands, and parts of France. The region was divided in the Eighty Years' War from 1568 to 1648, and Belgium was separated into the Southern Netherlands. The area was annexed by France during the French Revolution and at its dissolution, becoming the United Kingdom of the Netherlands in 1815. A rebel movement erupted with the Belgian Revolution in 1830, and the Southern Provinces separated from the Netherlands, becoming Belgium with King Leopold I as its leader in 1831.

With the German Schlieffen Plan, Belgium was a major battleground in what became known as the Rape of Belgium, but at the end of World War I, Belgium annexed parts of Prussia to expand its territory. However, by 1940, Germany invaded Belgium once again and the king was eventually forced to abdicate. The territory was returned after the war, and the Belgium became a founding member of NATO and is united with the Netherlands and Luxembourg as the Benelux group.

Neighboring Countries
Belgium is bordered by the Netherlands, Germany, Luxembourg, and France.

Geography
Belgium is situated in the lowlands of Western Europe, with coastline along the North Sea. The terrain of Belgium is divided into three regions, including the northern coastal plains and sand dunes, the rocky hills and forests of Ardennes in the south, and the plateau between the two, which features fertile valleys and gorges. The coastal regions of Belgium are protected by dikes and much of the land is reclaimed and is situated below sea level, leaving them prone to flooding.

The highest point in Belgium is located at Signal de Botrange, at an elevation of 694 meters (2, 277 feet) above sea level. The main rivers of Belgium include the Scheldt, the Meuse, and the Yser Rivers, and canals are common in the coastal region of the country, including the Brussels-Scheldt and Brussels-Charleroi Canals.

Points of Interest
Though a fairly small country, Belgium is packed with historical sites and architecture, with a vibrant culture and natural sites, too. The capital, Brussels, is a multicultural city with international flair, with both Flemish and Dutch populations. Notable sites in the capital include the Grand Palace-Grote Markt in the town center, with historic buildings and Belgian waffle shops, Manneken Pis, the city's iconic statue, and a variety of museums, parks, cathedrals, and squares. Brussels also houses meeting spaces of the European Union. The old town of Bruges is a UNESCO World Heritage site with attractions like the belfry from the 13th century, Basilica of the Holy Blood, picturesque facades, chocolate shops, breweries, and museums.

Outside of the cities, Belgium features the Ardennes forest and hills, which are home to caves like Han-sur-Lesse, a variety of wildlife, and medieval castles and citadels.