Trains from London to Germany 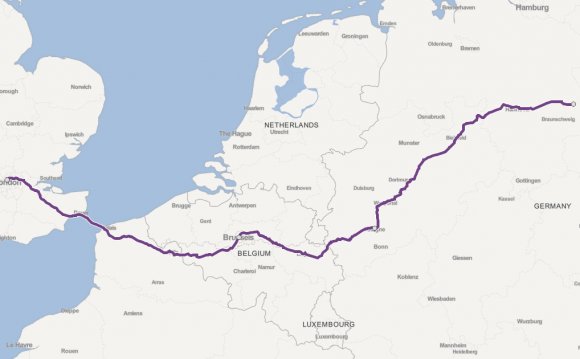 The train journey from London to Cologne is very easy. Eurostar trains from London connect very efficiently at Brussels Midi station with onward high-speed services to Cologne. These latter trains are either Thalys services or ICE trains operated by Deutsche Bahn. Both offer equally high levels of comfort and service. The cheaper fares sold by Loco2 tend to be for the Eurostar and ICE combination rather than for the Eurostar and Thalys option.

Rail tickets from London to Cologne via Brussels normally go on sale three months prior to travel. On your journey from London to Cologne by train, you’ll speed across the territory of four countries: England, France, Belgium and Germany. As the latter three countries are all members of Schengen, there is little by way of border formalities.

From Brussels-Midi there are up to nine high-speed trains to Cologne each day – a mix of Thalys and ICE services. The journey takes just under two hours and most trains make just a couple of stops along the way.

The first part of the journey from Brussels traverses the flat lands of Brabant to reach Liège-Guillemins station. East from Liège, the train joins a new high-speed line which cuts in tunnels through hilly country to reach the German border just before Aachen. Beyond Aachen, the train traverses flat terrain to reach the Rhineland city of Cologne, where you arrive at the city’s main station (the Hauptbahnhof), located on the west bank of the Rhine right by Cologne Cathedral.