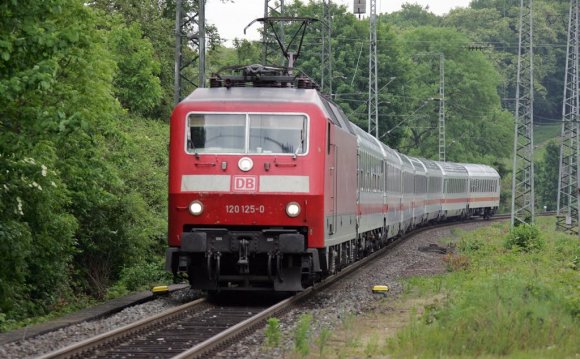 Berlin Friedrichstraße is located on the Friedrichstraße, a major north-south street in the destrict of Berlin Mitte, adjacent to the point where the street crosses the Spree river. Due to its central location in Berlin and its proximity to attractions such as Unter den Linden boulevard, the Brandenburg Gate and the Reichstag, the station is a favourite destination for tourists.

During the Cold War, Friedrichstraße became famous for being a station that was located entirely in East Berlin, yet continued to be served by S-Bahn, U-Bahn trains from West Berlin as well as long distance trains from countries west of the Iron Curtain. The station also was a major border crossing between East and West Berlin.

Measured by the number of passengers Berlin Friedrichstraße is the main junction for regional traffic in Berlin.

The guide to the station will soon be available.

You will find Bus and Tram stations on the forecourts on the south side.

The building in Spreebogen, which is the most modern crossing station in Europe, effectively combines striking architecture with the mobility requirements of the 21st century. Every day, some 1.000 long-distance, regional and rapid transit trains call at the 14 platforms on two different levels.

The new rail concept for Berlin and the greater Berlin area offers improved services, shorter journey times, more convenience and reliability. For journeys within Germany or to one of our neighbouring countries, the Berlin Hauptbahnhof is Europe's largest crossing station. The Hauptbahnhof links up all the long-distance lines with the S-Bahn and regional trains, so that changing trains has become a lot easier.

North-south traffic is concentrated in the Tiergarten tunnel, which reduces journey times significantly, e.g. by 40 minutes on both the Berlin–Stralsund and Berlin–Leipzig lines. Long-distance trains travelling through the Tiergarten tunnel include the Hamburg–Berlin–Leipzig–Munich, Hamburg–Berlin–Dresden–Prague and Stralsund–Berlin–Erfurt services.

The Tiergarten tunnel provides capacity relief to the very busy east-west line (Stadtbahn), on which the Cologne–Hanover–Berlin, Basel/Stuttgart–Frankfurt–Berlin and Berlin–Osnabrück–Amsterdam/Münster services continue to operate.

Berlin Hauptbahnhof is not only an important transport hub, but also a shopping paradise with more than 80 shops and is open for shopping seven days a week, from 8 am to 10 pm.

Thanks to its central location, the passenger building also gives visitors a fantastic view of the Reichstag building and the Federal Chancellery in Berlin's government district.

Continuing by Bus, U- or S-Bahn

To avoid traffic jams and red lights, use public transportation. You will find the S-Bahn on the 2nd floor, the Bus stations on the forecourts and the U-Bahn in the passageway on the 1st lower level.

The Travellers' Aid Society provides various services, pastoral care and attends to the social welfare of travellers and visitors to the station who are in need of help.

Location: inside the station, at Washingtonplatz exit